Symptoms and Treatment Methods of Sensitization to Protein Foods

At the beginning, to explain the term of sensitization to protein foods, we’ll give an example of experiment derived on cavy. Cavy was given a small quantity of egg white (instead of egg white it could be some other, of course, innocuous protein substance).

The amount of loaded protein substance under the cavy’s skin is so small, that there are no visible injuries on the body of animal. After ten days, the cavy was re-injected the same amount of protein of the same substance, and the animal died in the interval of several minutes, with the classic violent food poisoning signs.

This phenomenon, which occurs by entering foreign proteins in the body, which produces a certain reaction of the organism, with symptoms of poisoning, also called protein sensitization or anaphylaxis. Protein sensitization was observed for the first time, when studying the therapeutic serum, and then many things became clearer and got the true meaning and explanation.

It is now widely known, the reaction to the tuberculin and similar accompanying bacterial infections, has quite a logical explanation in the occurrence of anaphylactic exchange.

The sensitivity of some people on the pollen of certain plant species, with accompanying symptoms of shortness of breath (asthma) and other characteristic reactions of the organism, is also taken as a typical example of anaphylaxis. 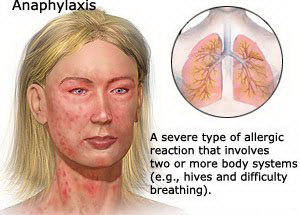 Some cases of sensitivity to certain food substances are among the anaphylactic response. It is known that certain foods, which are completely harmless for some people, can be toxic for others and cause major health problems. Some of these foods, often used in human nutrition, are, for example, strawberry and some other fruits and some types of shellfish.

Allergic reactions in the body of certain individuals were recorded during the consumption of cow’s milk and eggs. Reactions may be smaller and larger intensity. It’s varying from mild rash to large disturbances and disorders in the work of the gastrointestinal, circulatory and nerve systems.

A typical example of the sensitivity to protein foods is explained on the example of a child 21 months old. The child was apparently healthy, with the exception of some eczema. When the child reached the age of one year, was given egg whites, followed by nausea and vomiting in a very short time.

Eight months later, when the child was again consumed the egg whites began to sneeze and appeared to have symptoms of acute coryza. The child’s eyelids became edematous, and extensive utrikaria has covered most of his body. Body temperature remained within normal limits and there is no record loss of consciousness.

The symptoms of these attacks vary from person to person, but generally there is a pronounced urtikaria accompanied by nausea, diarrhea and frequent vomiting. For eight year old boy, was registered sensitiveness to several foods at a time. The boy has consumed eggs, almonds and oatmeal.

Tests have shown that the reaction occurred only due to the protein composition of these foods, while the extracts and preparations, regardless of the protein, remained completely inert. In any case, the speed at which symptoms occur as a result of sensitivity to protein foods is characteristically large.

Reaction to cow’s milk, which is observed mainly in infants, is anaphylactic phenomenon. Replacing cow’s milk with goat’s milk has proved in practice as very good and adequate solution.

In very difficult and problematic cases, in practice is stabilized method, which consists in bringing the patient in a particular condition, called ‘anti-anaphylaxis‘. This method is based on precisely dosed intake of protein substances in certain time intervals. The experiment was done in a child with serious cases of sensitization to protein foods.

The child is consumed teaspoon mixture of half a liter of water and drops of egg white. Given that this dose did not cause any reaction, after a while, the child was given another dose of this mixture. The child has consumed three doses a day, at intervals of three months, when it was reported a surprisingly positive result.

The child was desensitized to the extent that one sip of pure egg white has not led to any adverse reactions. But unfortunately, there are those other cases where the patient cannot bear even the slightest dose of protein diluted with water, because in a very short period of time gets very pronounced symptoms of anaphylactic shock.

The fact is that various forms of asthma are dependent to certain foods. A large number of experts dealing with this problem consider that any particular kind of food products a constant and characteristic set of symptoms.