How to Prepare and Store Food Safely?

In developed countries, it is far easier to make progress in the field of protection against food poisoning, but it is the case in poor countries and developing countries. Better financial situation in rich countries, allows the government to enact and implement a series of laws and regulations that will regulate to a large extent, the market of foods and their safety, above all.

Of course, it is impossible to guarantee one hundred percent protection against food poisoning, but it is possible to be reduced to an acceptable level. Accordingly, here will be mentioned a lot of ways for the preparation and storage of foods, which will certainly be of benefit to every individual in reducing the risk of food poisoning.

Probably the best home protection from food poisoning is, thermal processing of foods, or cooking. The process of cooking, long enough and at the appropriate temperature, will very effectively destroy a large number of bacteria and viruses in a defective food.

For example, among these are bacteria and viruses are Salmonella, Staphylococcus aureus, E. coli, hepatitis A, moulds, yeasts, etc… Moulds, yeasts and many species of bacteria can be destroyed by cooking at temperatures above 140 °F lasting more than 15 minutes.

Spores of some species of bacteria can survive in food, even after several hours of cooking in boiling water (stews and soup for example). As for viruses, for their destruction is required higher temperature, not less than 176 °F. 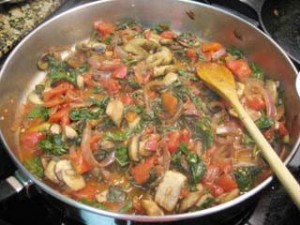 In the industrial production of food is used, often, the process of pasteurization. Pasteurization is a ‘form of cooking’, which is used primarily for the processing of dairy products, juices and canned foods. Pasteurized milk is obtained when fresh milk is exposed to high temperatures of at least 162 °F for 15 seconds, and then quickly cooled to a temperature below 40 °F.

Milk that is pasteurized still has to be kept in the refrigerator, because some bacteria or its spores can survive that process. Milk is a food whose processing should be given special attention, because it is known how drastic can be food poisoning signs caused by consumption of bacteriological defective milk or milk products.

Cooking, of course, cannot remove all bacteria and guarantee that the food so prepared is safe for use. Some types of bacteria can be eliminated by thermal treatment of food, but not chemical toxins produced by these bacteria.

You should be careful when removing food from the fridge or freezer, because they may contain bacteria that are waiting for the right temperature and conditions, to continue its rapid growth and expansion. It is important to know that, cooling of food, up to certain temperature, use of refrigerator or freezer, do not fix anything, and does not make food safer than it was before cooling.

Drying foods is another method of food preservation, which also does not guarantee the destruction of bacteria, but it certainly prevents the spread and development. It is known that moist environment is conducive to the growth of bacteria, and by drying foods bacteria lose conditions favorable for their normal development.

Examples of such foods are milk powder, raisins, dried plums, apricots and other fruits. There is also a traditional method of drying foods, and that is ‘smoking’ foods. This technique is used for dehydration of fish and meat.

Salting is also one of the traditional, commonly used methods to preserve food. It is used often in combination with drying the food. This combination really makes it difficult for bacteria, moulds and yeasts to grow. Generally, salting does not kill bacteria, so raw, salted foods should still be boiled before use.

Using of vinegar or citric acid to preserve food is also hampering the microorganisms to multiply and grow. Acidic environment with increased pH factor is much less favorable for the bacteria from a neutral or alkaline environment.

As for spices, their role in the preservation of food is also limited. Spices are generally used to overcome unpleasant odors and tastes that can get foods, due to prolonged storage. However, some of the traditional spices such as cinnamon, garlic and, say, cloves, have a mild preservative action. 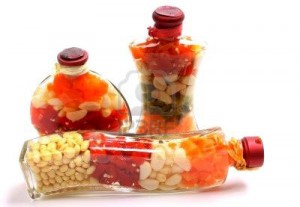 Alcohol is a good preservative. Fruit that is preserved in alcohol, enriches the taste of the drink, and remain edible and usable after a long time.

There are many techniques for preserving foods, and each is used for a certain type of food, in accordance with the quality and the need for action. Exposure to ultraviolet rays of foods, radiation, vacuum, antibiotics, genetic engineering, are some of the techniques of food preservation in order to eliminate the presence of bacteria in food. Food preservation is an important procedure that should be used, for food to be of sufficient quality, which would significantly reduce the possibility of food poisoning.